(Link to the original post, December 2015)
RETROSPECTIVE – that is the name of the new double CD album of the Ron Evans Group. When we discussed the new project in 2014 for the first time, the title of the CD was not yet clear, but the topic. A review of the recent releases by Ron, a compilation of the songs that are particularly important to him and thereby give a representative cross-section of his versatile repertoire.

We met for two photo shootings in Hannover. I suggested to Ron the alley at Rudolf-von-Bennigsen-Ufer – a place I like very much to capture a portrait in front of an increasingly blurring perspective. Depending on the light and the season the look is always different here. For both shootings I had the Leica M and the Noctilux with me.

The first set was in fall 2014, we experimented with different points of view and from that day comes the picture on the disc 2 and the back of the CD case. The cover photo was shot in March 2015. It was not really as warm as it looks at the photo 😉
But the T-shirt with the guitars was an ideal starting point for a small colour-key gimmick that I had used in the final production. The idea actually came from Ron, I had this time actually a classic black and white layout for the outsides of the CD cover in mind. From that day in March and also the photo for the inlay was taken.

For the inside of the inlay I found something in my archives, done a few years ago at a show in Zwenkau. I was looking for a detail photo with multicoloured light effect and dark background as it should blend in well with the reproduction of the small CD cover pictures and the text. This photo was shot with my old Nikon D200 and a Carl Zeiss Planar lens.

After the selection of the final image material the creation of the print data with Adobe Indesign and the coordination of details with the CD-producers were the next steps.

A review of the Süddeutsche Zeitung of the production can be read here. And you can listen to the CD here or on Ron’s website.
Actually this short article should have went online on time for Ron’s Birthday – now its a few days late, but yet again here: “Happy Birthday, Ron!” 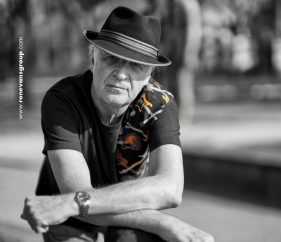 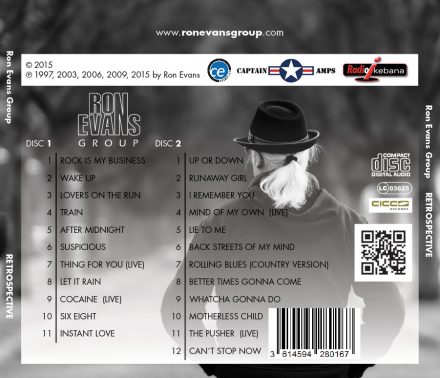 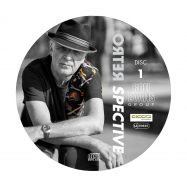 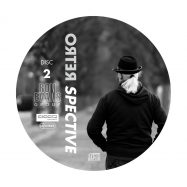